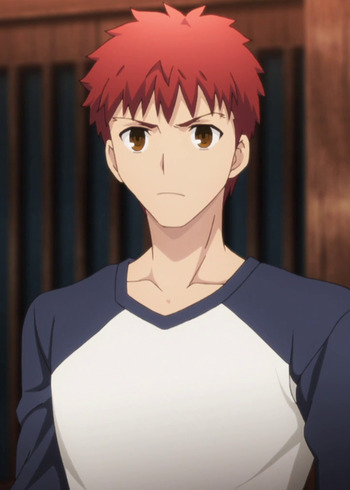 Shirou Emiya has a very strong sense of justice which determines his life choices. Due to the influence of his adopted father, Shirou wants to become a 'Hero of Justice', and stubbornly tries to do everything and save everyone by his own power. He values other people's lives above his own, so will go to great lengths to protect them. He only has one magic power, which is rare for a magician, but even so he manages to encounter the servant called Saber and get dragged into the Holy Grail War which he must win.

I can't stand him, he's just too stupid.

I reserve marking a character as "hated" for when I think his or her presence in the story ruins/interrupts/mars the otherwise unobjectionable (usually quite good) unfolding of the story.

So it's a little out of the ordinary for me to offically "hate" Shirou, considering he's the protagonist of the series. Which, in most cases, would make me abandon the series before getting far enough to like or dislike anything else. But, despite my dislike of him (and the poor quality of Fate Stay/Night overall), I'm oddly compelled to keep watching.

Admittedly, I'm only halfway through Stay/Night, so I recognize there are 900 other instances of better-regarded versions of his character I have yet to meet. And there is every possibility his irritating qualities are as much a result of when he was created as who he is.

But I can't help but think the series would be better if Shirou was replaced with a totally functional, single-mindedly plot-progressing generic protagonist automaton.

And, though Stay/Night is (generally speaking) mostly garbage, only one of the characters makes me audibly sigh when he starts speaking.

I guess many people don't get the complexity of Shirou's character.. He cleary suffers due to an mentally illness, caused by his past trauma.. He got an Martyr Complex, Survivor's Guilt, Hero Complex and Hero worship.

He try to fill his emptiness! And the only way to accomplish this goal, is connected to his ideals. Shirou saw how happy kiritsugu was at the moment he rescued him, so he wanted to feel the same. Furthermore he want to continue kiritsugus dream, because he failed in zero.

Shirou was the only surviver of the fire and think his life has no value..so he feel guilty because of it. That's why he often act very reckless. He is not dumb..just insane. And yes.. His interpretation of a "heroes of justice" is more idealistic and not that realistic like kiritsugu at first, but thats the point of the story.

In ubw: He keep his ideals.. But he changed during the route.. He acknowledge that he can't save everyone.. But still continue with it, because it's the right thing to do for him. You can also see it at his ubw Chant.. It's a more positive and optimistic version, if you compare it to archer.

In heavens feel it's completely different.

He is confronted to make a hard decision between his ideals and the person he love. (similar to kiritsugu in zero). The scene where he nearly killed sakura was very strong to express his personality. You saw his cold eyes.. Focused on his ideal.. But in the end he breaks down and throw his ideals away for the person he loves. This is a huge character development if you consider how important his ideals are for him.

He is basically a "good version" of kotomine kirei.

I guess the DEEN fate route butchered his character.. So he got an bad image after that. Luckily ufotable did a much better job (especially in heavens feel) for his characterisation.