Aka: Villain in Glasses 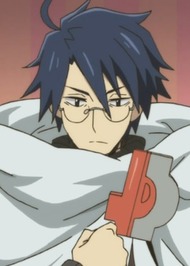 Best character in this show honestly

honestly one of my favourite characters ever

He is what should be called "badass" instead of Kirito. He showed what it's like to be in strategy games and THIS IS, KIDS, HOW YOU DO FIGHT IN GAMES. You USE YOUR HEAD not DASH STRAIGHT TO THE ENEMY WITHOUT PUTTING YOUR BRAIN INTO IT. He is not just introduced as "badass" just because. He was introduced as "intelligent, knows his shit" AND THAT'S HOW WE KNOW HE'S GOING TO BE BADASS.