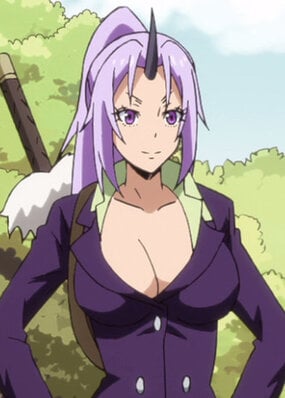 Man she's really annoying. I do wish she stayed dead but no, they can't exactly kill off the "fan service" character unfortunately.

My waifuuuuu. I love her strong independent character and deep tough voice. She's definitely a dom~

Shion is best girl I love her

I wish she stayed dead

The most annoying character in all of anime. I don't mean in this anime but in all anime which were created since Katsudou Shashin(1907). She is here literally just for tits and "comedic relief" in form of her shitty cooking. Tits are disgustingly enormous and her shitty cooking was funny exactly one time, since then it's more anoying than filler arcs in Bleach.
!!!SPOILERS TO SEASON TWO (and a rant) AHEAD!!!
Okay, she died heroid death and I started to like her a little bit they had to revive and immediately come up with a shitty cooking joke... But it could be second good shitty cooking joke if it went as Benimaru wanted... Obviously no, Rimuru must let Shion and Shuna to do literally anything they want with him... annoying