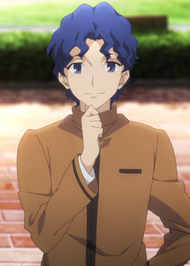 Why do I hate Shinji so much? It's pretty simple when I think about it. Shinji isn't just the worst character in the series, he might just be the worstest character of all time. Just imaging him walking through Fuyuki, all the ladies cringe at his very scent. They know how he smells, the essence of his smell is sold under the the name of "Matou Simp." The very nature of Shinji is mystery. could he be playing a deeper game than even his creator realizes? The answer is no. However, Shinji is filled with such lies, such bullshit that he does not even use these disabilities. Why, you might ask? You will never know, for the mind of the Shinji is one that is easily penetrated. Shinji is such a force of a trash can in his realm that nothing can truly touch him without doing a 360 noscope, the only thing keeping him bound to the page at all is because he never could have made it to top waifus. Shinji is not only beyond the comprehension of us, he exists within a plane of true NEET. Observe his ugly smile, his nonexistent biceps, his long ass nose, and most importantly, his eyes. His eyes, like two raisins , make me throw up. Do not stare into them. Many incels have gone mad in the attempt. Shinji is not just a character, a formless collection of words and images, he is himself is the binding that holds the saga of trashcans together. Without Shinji, the entire trash waifus and husbandos as we know them crumbles. These are just of a few of the reasons why I hate Shinji so much.

Hate him so much

Words can't even describe how much I loathe this trash.

even in carnival phantism i hated him