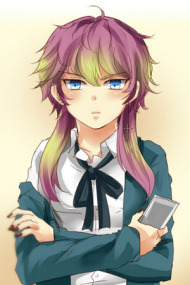 She was my best female chara in this story so far. But the way she instantly parted ways with MC just after knowing truth was sick af.

Now I truly hate her.

When mc needed her most, she left him.

Her ability is ridiculously overpowered xD

She’s probably the best character in the story.  She is the opposite of Claire in every significant way.  She poses as a delinquent while hiding a sweet unselfish caring side that easily defuses John in his worst moods.  She has power but doesn’t abuse it.  Even before John’s rebellious against a flawed society changed her, she never agreed with it but felt powerless to do anything despite being the most powerful magic user around.  It’s one of the underlying recurring themes in Unordinary.  Great power does not always translate to great influence, freedom, or ability to improve anything or help everyone.  This basic sentiment is presented again and again.  She is so burdened by her gifts that she doesn’t care if she even has them like most others who only live by power and rank.  Ironically like the story, Danmachi, she is the girl usually saving the boy from danger.