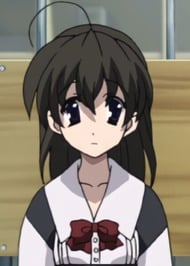 Energetic, confident and bubbly, Sekai Saionji is an everyday high school girl who fancies herself as quite the matchmaker. When she hears of Makoto's crush on Kotonoha Katsura, she puts her feelings for him to one side and decides help out by setting him up with the timid Kotonoha.

Honestly throughout the entire anime UNTIL the end I was rooting for her. I was ready to deem her the only character worth giving a shit about and she just had to fucking take an acid trip and go insane

i personally found her worse than makoto

Karma is a bitch aint it

Despised her in the manga, VN and anime adaptation! In the beginning I was all for considering her Best Girl until she revealed herself a manipulative jealous vamp who used Kotonoha and Makoto's weaknesses to her own benefit. Literally defines FAKE FRIEND, this two-timing snake! She started the chain of events that crushed the lives of people she seemed to care about and paid the ultimate price for her own crazy callous deeds. Appearing pure, supportive and noble while she really harbored a dark obssessive side. Wrong as it was, I was proud of Kotonoha for finishing this Delilah off in the end.

Would have been better if she helped Makoto and Kotonoha grow and improve in their personal shortcomings and flaws instead of give in to infidelity and screw them both up and leading to a heart-wrenching tragedy. Unfortunate waste of a potentially good character and friend most people unfortunately don't have.