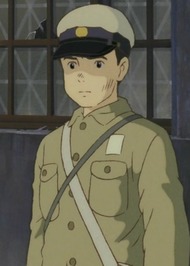 His actions killed both him and his sister. Verbal abuse is nothing compared to the war and the consequences of it.

Y'all forgetting that he's ALSO still a child wjindhn. And it wasn't only pride, he saw that his little sister hated that aunt so he wanted to make her happy again. He did everything he could to get her food

A lot of people are saying that Seita's worst character flaw is pride. Am I the only one who never saw that pride when I watched the movie? If any pride was noticeable to me, it was the kind that had a goal of giving his four-year-old sister as normal a life as possible, for as long as possible.

Dignity and respect were important to the Japanese (and still are), and Seita was just trying to give that to his sister when other people wouldn't/couldn't afford to.

Oh thank you, some people see it also. He was horrible brother whose pride killed his sister.
This whole movie was ruined for me because of this character.
Even if living with his aunt was shitty at least he and his sister had a roof.
Couldn't empithize with him after that, and the whole plot of the movie is contingent on you caring for the characters.

After watching the movie, the only mystery left for me was the source of his imprudent pride, which we all know cause his and his little sister death.

I wondered if it was his pride as a son of an imperial navy, or just simply the pride of a 14 year old teen.

I immediately found it odd when Seita arrived to his Aunt home with little to no respect shown to the Aunt. He was extremely ungrateful and ill-mannered to someone who took him and his little sister in. He should've joined the army or do something other than loaf around at someone elses home. I was surprised that his Aunt even lasted that long without kicking him out.

But above all else I think we can agree that he's an excellent brother and have shown great filial piety to his parents.