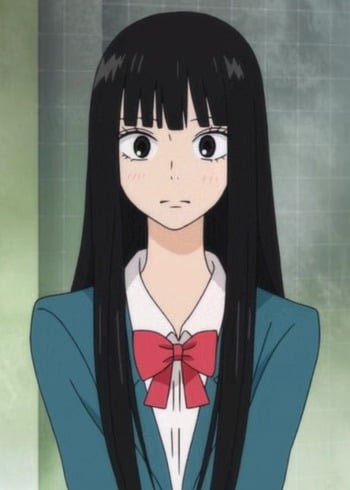 Her long, straight hair both earned her the nickname 'Sadako' and helped the already socially awkward girl become isolated from her classmates despite her best efforts to make friends. Sawako's polite, caring nature leads her to be easily taken advantage of, even by those who find her smile disturbing.

I honestly find her very relatable, and I'm an adult male lmfao.

A girl who gets teased often for looking like the character from The Ring. She know she gets teased for it, but she doesn't make the effort to change her appearance a bit i.e. clipping her hair back or cutting her hair. Sure, you shouldn't give in to what other people say about you and change your appearance, but judging by the later events in the story, she never had her own pride and gave into peer pressure anyway.

She also literally has no personality – no backbone, and somehow the most popular guy falls in love with her. There are millions of girls out there who are kind and sweet, but nope, just Sawako is the perfect one for him – totally makes sense.

She has a bunch of friends who circle around her, too, when she has no personality – another point that makes sense.

Her voice actress made me drop the whole thing because she just tried too hard to act innocent and had this annoying airy voice.

By far the worst shoujo heroine ever.

she is so wholesome and adorable, like please, my poor heart

So pure. How can anyone hate her.