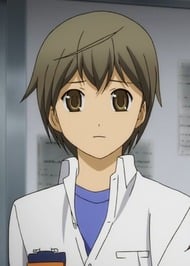 oh yeah sure i'll just leave my little sister with a ghost guiding her to the bathroom in this abandoned school full of corpses. What could go wrong?

I feel really bad the fact that he didn't actually survive especially with after seeing his own little sister dying in front of him. May he rest in peace.

good protag. a little bland but still loveable and a whole ass mood  :3

He leaves his sister to die every five seconds, is built up by the other characters as a badass and then they never show it, he has no backstory, development, or even a personality besides from being a shy lady killer, he only has two roles and one of said roles could been done by Yuka, Yoshiki or Ayumi, the game treats him like the main character but he's spoken of more than he actually appears(In my opinion, Yoshiki and Ayumi are the main characters), the game treats him like he has a pure heart when he gives more shits about the girl he loves for her boobs instead of the safety of his little sister, AND like every other character in the anime(Except for Yuka), he is out of character in the anime.

The only portrayal of this character I can tolerate is the manga version. Sure, he still almost gets Yuka killed every second but he actually DOES try to protect her, actually saves her life at one point from Kizami, helps Naomi out of her despair by adding an arc that wasn't in the game, is much more mature than in the game and anime, doesn't have a face that makes me want to punch his teeth in, and has the most personality out of all of his portrayals.

I swear to god, Yoshiki should have been the main character. At least he has a personality, backstory and development(And he doesn't die)