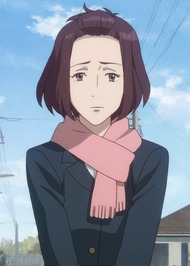 My mind was about to explode after seeing all of the positive comments at first. But now I am really happy to see so many people making sense and mentioning how annoying she is! I am not sure but she may be a more disliked character on my list over SAKURA! Well, at least Shinichi didn't hook up with that stalker. Maybe that aunt would've been a better choice over literary every female character.

She was a far better match for Shinichi than Kana could hope to be. At least she didn't put him up on a pedestal, stalk him and make his damn hair into a ring.

Plus how can you be there for someone when they won't tell you anything? She doesn't get much development, but come on, she doesn't deserve to be as hated as she is.

Okay so, screenshot won't post but... here it is

First of all, I'm going to preface this by clarifying that I don't buy into any of this "useful" or "useless" nonsense.

Authors have a right to include characters who might not contribute anything to the plot- Shinohara's wife didn't contribute anything to the plot of Tokyo Ghoul but Ishida still had every right to include her because... guess what? People get married- and to people outside their line of work even. Even if she contributed nothing to the plot, she added more realism because a wife is something an investigator might realistically have. Iwaaki had every right as the author to include a girlfriend for Shinichi who might not contribute much to the plot (at least not in the way you seem to think she should have.) The love interest doesn't have to be someone like Kana (who would make an awful choice- she's a shallow bitch who appreciated Shinichi for nothing more than she was mystified by him and the romantic notion that she might have a 'soulmate.')

Murano was what kept Shinichi tethered to his humanity. She didn't have to offer anything more to the story because she was fulfilling her purpose as a character that Iwaaki intended for her- giving Shinichi something to care about and to keep him grounded to his human half. Also? Murano was her own person and didn't have to go along with literally everything Shinichi said or did. He was behaving strangely and suddenly changed every bit of himself. Murano doesn't have to just accept that without questions. (Also,Shinichi didn't tell her ANYTHING. Is she supposed to just... be chill with knowing her boyfriend is keeping a big, life-altering secret from her?)

But she can only do so much when Shinichi won't tell her a single thing.

She seems one-dimensional because she wasn't intended to have a big role in the story. And that's fine. Not every character has to be more than that. Especially not in a realistic story- and from his note in the manga, Iwaaki was shooting for realistic characters.

Kana wasn't more of a character, lmao. If anything, her wasted potential makes her far worse than Murano ever. You expect more from Kana but she... falls flat and wastes herself trying to steal another woman's man. I don't care if you think you're better than she is. That's a line you don't cross.

She had this unexplained gift and what does she do with it? Spends numerous episodes stalking and obsessing over the MC, being a borderline homewrecker (anyone with any amount of decency knows to back away once you realize your crush is taken) and ultimately gets herself killed. Good riddance.

I can definitely see how Murano would be annoying, what with the "are you really Shinichi Izumi" but I don't hate her. But I like her because she wasn't some female character groveling at the mc's feet and vying for his attention (eg. Hinata and Sakura), she got angry with him (for groping her and she didn't just drop it, he had to apologize for that shit and the narrative didn't fall down the sexist rabbithole and treat her like she was in the wrong for being angry- a woman allowed to be angry without being treated narratively like a bitch), she had a life of her own- even if we saw very little of it. Yes, I do wish we could have seen more of her, but like I said above, her role wasn't meant to be huge.

I was prepared to like Kana- she was really interesting when she first appeared. It was when she became convinced that she was Shinichi's soulmate and when she wrapped his hair around her fingers that I decided she just wasn't it. And wrapping someone's hair around your finger? If your obsession is that deep, get help. Please.

Such a one dimensional character. A lot of the female characters in Parasyte aren't great and she's one of those not-great ones.