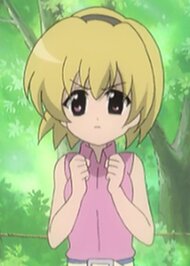 Definitely, doesn't deserve such hate. People should play visual novel too to understand her more.

@AustinDR: You might want to keep your eye on the manga version of the Gou Answer Arcs, since it's been portraying Satoko a lot more sympathetically and understandably than that anime travesty did.

Satoko didn't deserve the hate back then, and y'know what? She STILL doesn't deserve the hate now. Yes, she became a despicable villain in Gou/Sotsu, but not only were a lot of her iniital responses to the situation with Rika at St. Lucia understandable and believable given all the mental trauma and emotional baggage she carries, she also lost her perspective and humanity because Eua deliberately ensured that she did when she preyed upon her. Plus the Satoko who went bad due to her St. Lucia experience got wiped from existence by Hanyu's miracle in the end, and even the "Witch" version of her just detached from her to go become Lambdadelta or something.

The writing for Gou/Sotsu was just not very good in general, but I'd sooner blame that than hate the character of Satoko in general. Satoko deserves so much more love, respect, and appreciation, from writers and fans.