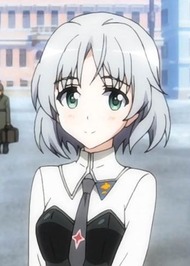 While Eila was my favorite and Sanya a close 2nd when I first watched this series, now that I've rewatched the series, I feel like I'm more of a Sanya fan. Her abilities, personality, design, and backstory were very mature and deep, and proof that Strike Witches when not focused on ecchi can be incredible with its tone of depressive war elements and hope. I don't hate ecchi a lot but I do believe that if Strike Witches had toned down on its ecchi scenes, more people would realize that it is very well written. It's a shame how Sanya and Eila, despite being one of the most popular characters of Strike Witches, don't get a lot of focus in the series/movies. I always liked them better than some of the mainly-focused characters from the 501st.