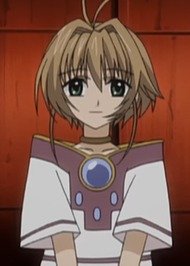 Mkay, I know my rant is overboard, but I just can't with her. Just because you lose your memories does not mean you lose all but two brain cells. Like she startes off stupidly and struggles to string two words together while we're waiting in complete silence for long enough the story stops mattering.. I mean anime (especially series from around the 90's-2000's) often struggle with these pacing issues and frozen, repetitive, unrealistically stupid characters, but this is bad even for anime.  It's ok, though, because she's docile, sweet, pure, and mindlessly "kind." And she has a warm smile. Don't forget that. Because a giirl's warm smile will one day save all men everywhere. That's how sh!t works. People who lose memories might struggle with identity, but they don't lose all sense of a personality! She makes what seems to be a good series unwatchable for me.

Go back and capture Clow cards.

I loved Sakura in cardcaptor. But in Tsubasa...