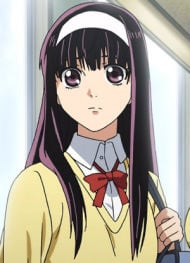 Annoyed me throughout the whole way. The worst protagonist I've ever seen with her purpose of existence and her bitchy attitude.

It seems like almost every female character in anime, visual novels, and video games whose first name is Sakura, except for about 4 or 5 of them I've come across, is either an absolute abominable poorly written female character or under-developed and lackluster compared to the other female characters in their series. Sakura Sakurakouji is of the former category—she is not only one of the worst female characters I've ever witnessed in anime but also one of the worst characters I've ever witnessed regardless of gender in all of entertainment as a whole. It is extremely rare for me to drop an anime, but I was close with Code: Breaker solely just because of Sakura, and mind you I watched every single episode of some of the most hated and quitted on animes such as Pupa. Sakurakouji is a perfect example of how not to write female protagonists.

Just all around shit character.