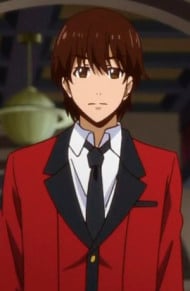 He's a nice guy and I like his character, but I feel like making him the main character was a bad choice, he's a bit too bland for the role. Someone else in the lead role would have been more interesting.

I like him but I wish he did more in the anime. Don't hate him, but they definitely made him to be too simple

At first I hated him because he didn't have much use to the anime itself, but later on in the anime he started getting more likable to me. Although hes not as exiting as the other charecters he still plays a part in the series.

I disliked Ryouta at first, but as I am rewatching the anime, I think he is alright. Other comments have said this, and I agree: he isn't as exciting and interesting as the other characters, but it is pretty difficult to be, and he isn't meant to be; he is meant to be the normal one who delivers the exposition. He is overshadowed by other characters because they are very eccentric, but he gets around the same amount of screentime as them, much of the time, and he plays an important role in many gambles. He is surprisingly bright and has unique thought processes, as well.

I kind of like him. He seems plaint compared to other characters (cause most of them are insane) but he's not bad tho. The only thing I don't understand is why he's at this school if he's not a good gambler. Changing school is the best he could do lol