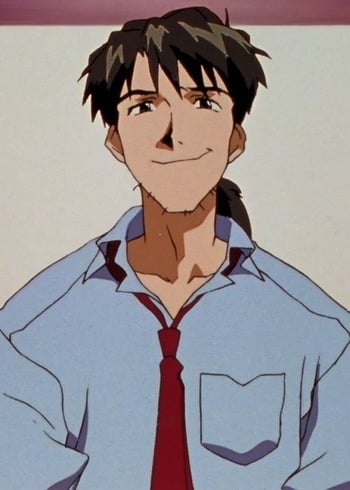 No cause I actually loved his character </3

How the fuck people like this guy, i mean do you guys even know what humanity is? Btw im so glad he died in episode 21

Why is he so hot

I was surprised to see someone else here who added him to the hate list at the same point in the series for the same reason (usagidere), but I suppose I shouldn't be.  Not just blatant but downright cringeworthy sexual harassment;  Yeah that's an instant no from me dog.  Didn't even finish the episode, just paused in the middle of the scene and opened up anime planet just for this.

Out of over a month an a half of total anime viewtime, this mf and Asuka are the first two characters that have annoyed me enough for me to go out of my way to actually put them on a list of characters I hate and both of these characters are not only from the same show but were introduced in tandem during the same episode;  I sure hope things get better for Eva.