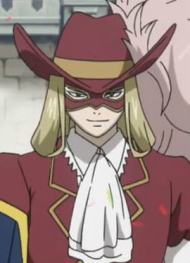 He remains me of Sirius De Alisia from Genesis of Aquarion, has the same looks and personality

okay ima just have a little rant here *POSSIBLE SPOILERS*. Rufus in the grand wizard games was all powerful and all tthat crap ok. his magic is (or could be at least) seriously OP. its a make magic, so his power is more or less limited to his imagination, and he seems to be able to memorize everything. he only has to see a power, or even just read it, and he can recreate it at will. even make it more powerful. he can even mix it with other magic that he can remember and make it even more powerful. his only limit is his own magical strength. with half a brain and some good training you can be pretty much invincible, which brings me to my problem with him. first off, he loses to gray. yes gray is pretty tough i guess (a little overrated in my opinion but lets not go there for today) but what did gray do to finally beat rufus? he made multiple items at once so rufus couldnt catch up and cancel his magic in time. seriously rufus has on occasion disapeared into thin air and re-appeared somewhere else when facing eve in the 1v1. why didnt he do that? why didnt he just attempt to block it? im sure has has seen or read some impressive blocking magic at some point. just because he cant memorize it he suddenly freaks the fuck out and loses? ugh no. the worst part is gray barely even makes loads of things, its all just the same thing, the ice sword, theres just loads of them. why is that so difficult. and secondly, up in the second season, against the dragons, why doesnt he copy the dragons slayer's magic and help fight? im pretty sure when he read the books in the library, it was of a ancient lost art, similar to what the dragon slaying is. you may be thinking "oh maybe he cant copy its power enough to be able to use it against dragons" but laxus and cobra were only second genertion dragons and still being able to do something, he could definitely at least copy theirs, changing it element to suit the dragon he was fighting. idk i just feel like hes a half assed character with a power which could be so much greater than he uses it. rant over.