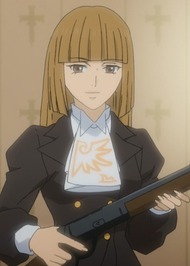 The youngest of the Ushiromiya siblings, Rosa lives with her daughter Maria. Secretly blaming the young girl for her husband leaving her, it seems like she has two personalities: One as a loving mother, the other as an agressive, hate filled woman. Regularly leaving her daughter home alone, she seeks men to keep her company.

I said some dumb shit about Rosa while reading ep 4, but I liked her at the episode 7 tea party.

I recognize the deeper layers and nuances to this character than what the anime was able to show us....but I still can't really say I'm a fan of her. The way she abused her daughter was just too much, and makes her easily one of my least liked members of the Ushiromiya family, and one of my least favorite characters in the series.

Maria is very annoying and Rosa's backstory is sad, but in no way does it excuse the abuse and belittlement of her daughter, IDC how bratty Maria is, she doesn't deserve to be hit and kicked and told she's worthless and a burden every time Rosa needs a lightning rod. She had many opportunities to break the cycle of the Ushiromiya abuse, but instead she chose to continue it smh

People would think Maria was annoying, but here's a woman that's much, much worse. I've read that Rosa had a bad past and was bullied by her own sister, and maybe upset about her husband leaving her or something, but that does NOT give her the excuse to be mean to her own daughter, Maria. Maria had trouble in her own reality with bullies at her school, her mother being abusive and mean, so she escapes it by having friends with Sakutaro and Rabbit Band figures, which Rosa destroyed. She deserved Maria killing her multiple times. Definitely one of the worst.

Yeah,Maria can be annoying as fuck,but abuse is too much.