Aka: Miss All Sunday 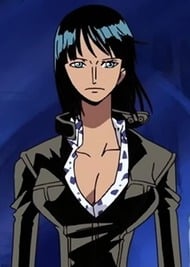 Robin is a quiet and more mature woman. She is highly intelligent with a particular interest in History and Archaeology. When not off on an adventure, Robin spends most of her time reading books or simply observing the antics of her comrades. She harnesses the power of the Flower-Flower fruit, a formidable power that enables her to bloom hands from any surface that she can see.

my favorite one piece girl

How can people hate her? Especially after what she did in the Wano arc?

I hate this woman. She has a fetish for masochism and lets her overpowered devil fruit go to absolute waste. She also wastes a lot of time reading books, people think she's smart, but she is one of the biggest idiots. At least you can argue that someone like luffy compensates for it, his plot-armor and raw strength, initiative, zoro has strength too, sanji can even cook... but robin doesn't read books as a hobby. Sanji's passion to cook actually helps the crew. Brook's passion for music actually affects enemies.

Robin is intelligent? Then why didn't she discuss her options with the crew instead of going all female "I'll pick the worst possible option and decide things for the crew in a suicidal decision then lure the crew into a very dangerous situation with the world government while not having the slightest faith in my crew". In alabasta she's like "oh I found one poneglyph, I'll just die here because idk".

The epitome was in the anime (maybe filler?) when she lets herself, miss nico robin 79mil bounty, by a bunch of the lowest weakest stereotypical "Bad guys" with guns. She acts like she is a helpless 5 year old child with no powers to fight anyone. At least usopp would've ran away and came up with a plan like snipe from a distance but nico robin just straight out "gives up". Then this dumbass genius realizes "oh right, I'm supposed to meet up with my crew" it took her far more time to realize than luffy. And her solution to escape the jail that she put herself in? The zoro-level stupidity of "I'll just cut off my hands". Yes, very practical, such a genius. On the level of other movies/anime jail escapes that you've seen. And what the hell is cutting off her hands supposed to accomplish? And how would she even do it? It took an outside force (the revolutionary army) to save her.

And on onigashima, wano arc, vs some bug lady, we have a flashback of her talking to sabo (602mil bounty) asking "hey, you wanna get strong? I can train you" she's like "nah thanks". Sums up perfectly her character.

She is a lazy idiot who wants to be on a permanent vacation, never works, never trains, never does anything, gives up immediately.

Fanboys: "hurr durr she's smart" tell me one single time when she came up with a clever idea or plan. And I can come up with at least 5 from the "idiots" like zoro/luffy/sanji or even others. At least when sanji/luffy/zoro do it, it's fun, interesting, original. Robin just sits there and does nothing. A pair of walking tits with no mind or personality of her own. Then again, it's better than the manipulative man-hating lesbian nami. Yikes. Shame that the crew doesn't have some good femminine characters. Even perona is far better and she was supposed to be an evil character.

I couldn't figure out Robin chan in the beginning is she good, is she bad? But waow I am just in love with her! <3

We have the same height! #Sisters