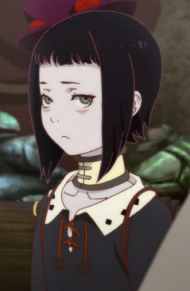 She is about the only character that remains solid and true to her original self in both season one and season two.  You could argue however that some of the others did so as well, if you totally discount the entire Bahamut episode and fight at the end of season one.  Because characters tend to change, develop, and evolve based on events in their lives throughout the story, except apparently for many in Bahamut season two.  At least Nina has somewhat of an excuse if you think she is too much the same from season one, and that his her immortality.  She is the only one who is.  The angels/gods can not be immortal if they can die so easily by human hands and neither are the demons for the same reason.  For that matter, that either demons or gods in this series can die at all.  Yet, I still think she did change, as she takes action when she senses something is wrong more so and more quickly than she did before Bahamut.