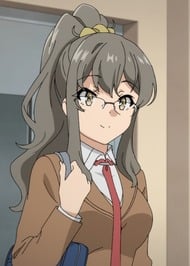 she honestly makes me cringe so bad. first off she gives sakuta manganese dioxide and claims it might be sugar because it is white. first of all, the bottle was labeled mangasese dioxide, second of all manganese dioxide is a black/brown powder so she was outright lying. next, I think she is kinda cringe, as she tries to act like she knows science, using things such as laplace's demon or shrodingers cat, but if she knew about either of those, she would know that laplace's demon could never exist, due to the nature of quantum mechanics. and then she uses shrodinger's cat completely wrong, trying to sound all philisopical, but ending up failing miserably. I think she is the weakest link in the show, and whenever she shows up I just know I wont like it. (source: I am a Senior physics major in college soon to get my bachelors) I can assure you that I have taken more courses on quantum mechanics and even I am unsure about it, so when she goes around acting like "Oh I know quantum physics, Oh I am soooo smart" and then completly butcher's everything I really dont like it.

hopefully, Futaba gets in a relationship with Kunimi.

I really liked her arc. She's very interesting and probably my favorite character. Yuuma is missing out big time, let me tell you

Best girl no cap, her arc was great.