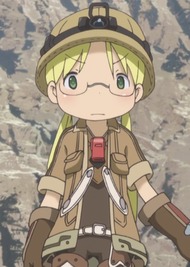 A  brave, energetic and determined child who was born in the Abyss and dreams of descending into its depths to locate her missing mother, a famous cave raider known as Lyza the Annihilator. Riko wears eyeglasses because exposure to the lower levels of the Abyss as a newborn damaged her eyes. Having grown up in Belchero, a place where orphaned children learn to excavate the upper levels of the Abyss to raise money for the orphanage, the young girl already has some experience as a Red Whistle, or apprentice cave raider. She is also talented at cooking and repairing machines.

i'm surprised how he hated she is mainly because she's very similar to early hxh gon. yeah, riko doesn't get any major powerups because this is not a shounen but what the series tick is her fucked up assurity that they have to get to the bottom or die trying. and she's prepared to lay it all on the line. there's something deeply wrong with her, but much like a character like gon, that feels like part of the appeal.

I'm genuinely surprised by all the people saying how annoying she is. Maybe it's because I haven't watched the English dub? She's by far my favorite character in the whole series. Loved her in the manga, and still loved her in the anime. While she's smart and extremely resourceful, she can't do everything by herself -- and that's the point. It's true, without Reg, she probably never would've made it past the first layer, but the reverse is also true: without her, Reg probably wouldn't have made it past the first layer either as he is. Yes, he apparently made it to the surface from the bottom, but that was before he lost his memory. Now he's got none of the memories or skills he had. He's seemingly invincible and has useful abilities, but he's completely, entirely indecisive, borderline cowardly, and has no directional or survival skills. They're each there to make up for what the other lacks.

i have to admit that riko was annoying af

An "eternal optimist" is one thing, but a "borderline imbecile with no sense of danger" is quite another. Which is what she is in actuality.

She is one super annoying brat. Clingy. I don't hate her, but I don't even like her. But in the end she is just a child. But even so, she's too much even for a child. She acts all smart and strong, but the truth is she is weak and useless. Well, she suffered a lot to the point even I was pleading the author to stop making her suffer so much. So she's like, full of flaws, too much realistic character in an unrealistic world.