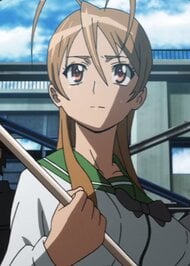 As a child, Rei promised to marry her childhood friend Takashi when they were older - though she eventually ended up with his friend Hisashi instead. She is kind, strong-willed and good with a staff in battle.

Y'all, she doesn't deserve this hate. Read this before you decide to hate her:

"Rei has held deep affection for Takashi since they were in kindergarten and has always liked him, even promising to marry him when they were kids. However, him ignoring her after she was held back in school caused Rei to believe that he had abandoned her, hence why she left him for Hisashi. Despite getting back together with him so soon after Hisashi's death, Rei doesn't consider Takashi to be a replacement for him, and even gets angry at Takashi for suspecting as much. At the Takagi Estate, Rei admits that she never should have broken up with Takashi, that she still loves him and if he were to fall in love with another girl, she wouldn't be able to live on."