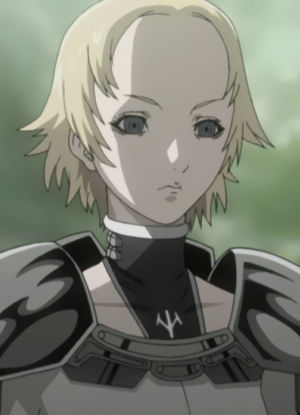 Priscilla looks so beautiful as a claymore warrior and just so awesome. she's brave and strong!

Mega Respect and best Girl along with the other Claymores!

What awesome challenges Priscilla faced to become a Claymore!

I respect Priscilla as a claymore warrior! so to me she deserves more respect and less hate.

Priscilla was Traumatized after Seeing her father feeding on her big sister and saw both her brother and mother dead.

Priscilla had no choice but to chop off her father's head and the trauma stayed with her after that.

Poor Priscilla she gone through so much I felt really bad for Priscilla. There's no reason to hate Priscilla after what she's been through. I still like Priscilla only as claymore though and unnecessary rude comments about Priscilla is just wrong and awful! What if that was you seeing a family or friend feed on a other family or friend it would be nightmare.

Priscilla is a great warrior and The Claymore Organization relied on Priscilla to uphold their law no killing humans.