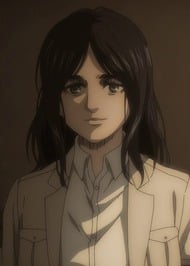 But her name, though... What was Isayama thinking when he settled for "Pieck FINGER"? LOL Sounds like some medical issue 😆 Her character was originally supposed to be a middle-aged man named Oliver Pieck before changing the Cart's user into a young woman. Should've just went with Olivia, then.

i'll clean her shoes ALL DAYY!!

Best girl in AoT and the most beautiful woman ever drawn in any anime ever.