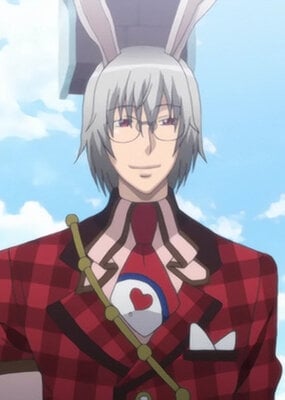 Based loosely on the White Rabbit of Alice in Wonderland, Peter White is a bunny-eared, pocket watch-carrying man who kidnaps Alice and brings her to Heartland. Professing his love for her, Peter borderline stalks the girl, appearing randomly and being flirtatious without boundaries.

He has the ability to turn into a rabbit at will, and is able to turn his pocket watch into a gun.

This guy ruined the series for me. I could not continue reading the longer his entitled incel antics went on. He is the epitome of a Nice Guy who just won't take "no" for an answer, will continously harrass the object of his affections in hopes of wearing her down and making her give him a chance, and will react with jealousy and even outright hostility over anyone he sees as being in the way of him winning the girl's heart. He was just absolutely insufferable, and the hint that he's somehow actually the one Alice loves most of all but she just doesn't remember is what made me stop reading the series. Peter is absolute shit, and the comment saying that Alice is "mean" to him for rejecting his creepy, stalker-y, over smothering advances and that he "deserves better" is really unsettling to me.

Alice is so mean to Peter. He deserves better.