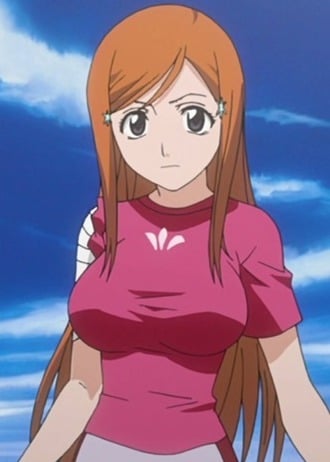 Orihime is Ichigo’s big-busted classmate. She is a bit ditzy and has a bizarrely unique taste in food, but she has a kind heart and never wants to see anyone get hurt. Though she is often naïve and a bit on the clueless side, Orihime is one of the first to notice when something isn’t right – particularly when it comes to Ichigo. Despite being one of the weakest in battle, Orihime tries her hardest to protect her friends using the six spirits contained in her hairclips.

She deserves the #17 most hated spot.

just finished bleach and she's so annoying bro wth. KurOsAkI KuN like girl stfu. shes literally just your average princess type character. pretty soft uwu girl who everyone she meets fall in love with. shes trash and her only reedeming factor is her dynamic with ulquiorra.

Y'all are entitled to like her, but so many people in the comments apparently can't grasp that there are reasons for disliking this character other than being a Rukia/Ichiruki fan. I'd suggest actually reading some of the comments that debunk this before you continue to throw that accusation around.

Sure there are Rukia/Ichiruki stans that hate Orihime for dumb reasons, but the majority of us loathe her because of her poor writing.

I wanted to like her. I really did, but just... ugh, she's a wasted character. She had potential but she's just... boobs. Like I look at her and I think, "Oh, that's the girl with boobs." It's the most noteworthy thing about her.

Well, everyone else has basically said what I could say.

I hate her so much.