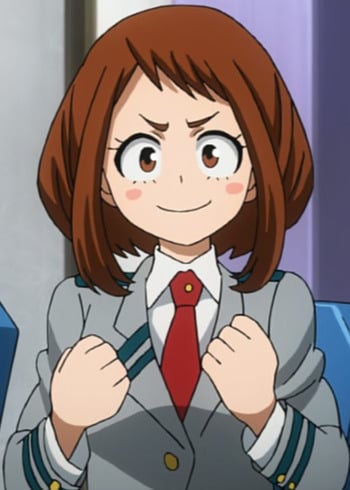 I don't think Uraraka is a terrible character but she definitely isn't a great or really good character, her crush on Deku and lack of importance compared to the other females in 1-A in later arcs imo really messes up her character.  Ofc I haven't caught up in the manga (I really need to lol) so maybe she improved but from where I'm at now, the writing for her needs improvement.

All this Ochako hate hurt ngl she's so bubbly and sweet

Tbh I don't get why so many people like her. She's Overly Obsessed with deku, she's annoying, likes deku which he ofc won't because he's more interested in being a hero rather than a relationship her. Her quirk ain't all that great if ya ask me. Literally anyone can beat the literal shit out of her before she can even use her quirk, Literally she has to physically Touch Something or someone to use her useless quirk. Fr If anyone was to be the Main Female it should of been Momo, Tsu, or Mina. She Fr only became a hero For Money for her and her parents sake fr messed up if ya ask me being a hero not to help people doesn't make sense if she just wanted to support her parents it's Called a job.

Probably would of liked her if she wasn't so obsessed with deku.