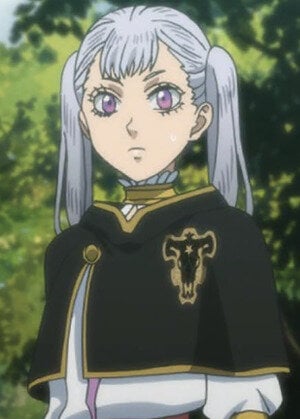 Now I personally love Noelle she is one of my favorite characters in Black Clover. Now I know the first thing that comes to people's mind when seeing this character is that she is annoying. I personally don't see her being annoying. I know people don't like her " I am Royalty" Pharse but I presonally see that being something funny and nice about her character. Moving on is her crush (Asta) she usually keeps that to herself though they're people in this anime who know about her liking Asta. I personally don't see whats wrong with that reltionship I actually ship those two a lot. Next is people complaining about her when she is fighting. This is also a big reason why people hate her because she does nothing and just sits there and watch people fight. Well that was also my first imperssion she doesn't do much in the battlefield but trust me throughtout the series she becomes brave and fights all the time she even obtains a new spell which lets her change into some water valkyrie armour (which I find sick af) This is also similar to Sakura (Naruto)a lot of people find her very annoying and usless. Now its true I have not watched Naruto so I don't know much about her character and personalilty but I also see her comments and hate are to harsh. Now even If I turn to hate Sakura I defientlly wouldn't go that far with the hate.

But yeah thats all I really go to say. Have a nice day.

the reason i dropped black clover,shes so annoying!