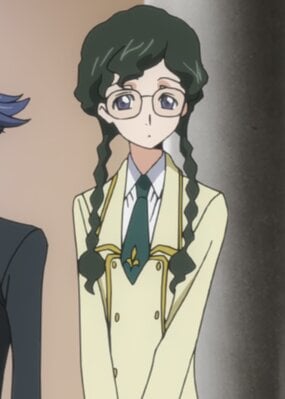 Develops an unhealthy obsession with Euphemia, whom she's met like once and doesn't know personally. Then is willing to detonate a nuclear bomb that would have wiped out an entire city (full of innocent people) just to get back at Lelouch. On top of which she creates a weapon which kills 35 million people. Her insanity can't excuse her atrocities.

She was willing to kill thousands to get at one man, and she actually did kill millions. Whether or not she pulled the trigger, she built the goddamn gun; she knew what she was building and what it was capable of - she can't be so stupid to not realise what a bomb is built for.She's a mess of mental issues and a war criminal and just thoroughly unlikeable. She needed to be in padded cell at the end, not around people, free, where she could potentially snap again and murder someone else.

Nina I want to punch you in the head.

I don't think she has a single redeaming quality.

She was OK towards the end, but seriously, how did she not realise what the consequences of building such a powerful weapon would be? For someone so smart, she is really stupid.