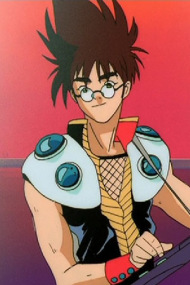 Nekki Basara, a music-loving pacifist, lived as an orphan in the mountains of Japan until he was found by Ray Lovelock, who convinced the boy to form the band Fire Bomber with him. Though normally laidback, Nekki is most animated when it comes to his music, brimming with excitement at his concerts, and seething with frustration when the meaning of his songs is misunderstood. In addition to being the lead singer and guitarist of Fire Bomber, Nekki pilots a VF-19 Kai Fire Valkyrie.