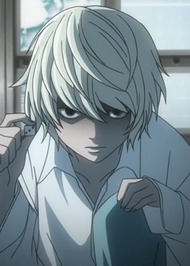 Why? Why is he 6th most hated? Why would you do this to him? He's quite literally a child who was groomed and raised to become the next L. He isn't a copy of L, he is just performing to the ridiculous standards of the L Program initiated by Wammy's Orphanage.

If you can't be bothered to learn about why a character is the way they are, then don't comment on them.

Near is very cute idc

You guys hate someone who is simply a copy of L and love someone that commits mass genocide? Near did end up getting Light killed so I respect him for that but I do admit he got done dirty, deserved his own character and development :(

I haven't watched Death Note, but I believe everyone on here defending Near, saying he's not a copy of L, or that he's "flawless" and still a cool character, doesn't quite understand. Of course, this likely means that my opinion is worthless, but so is everyone else's, so I'll just give my two cents since I don't have 3, because I'm broke. Anyway--I have watched clips of L. Lots of them. L would be my only reason for watching Death Note, so I know a decent bit about him, and therefore, will be my reference point (I mean c'mon, just look at this dude's character design. Tf do you mean, "not a copy of L"? And I'm assuming from those eyebags and complete apathy in his PFP, he has a watered-down, off-brand L personality, aside from the weird and characterizing things that made L cool and likeable, leaving behind only basic traits that anybody could have).

Ignoring my personal bias, let's just view Near in a completely impartial manner. People likely dislike him because L literally stated, "hey guys if i die then Light Yagami is the imposter" and they completely ignored it, but when Near does something along the same lines (again, haven't watched the show, so my opinion is not valuable), he gets praised and recognized for something L had pretty much already done. L also died for his work and wasn't exactly recognized, so that also probably doesn't help.