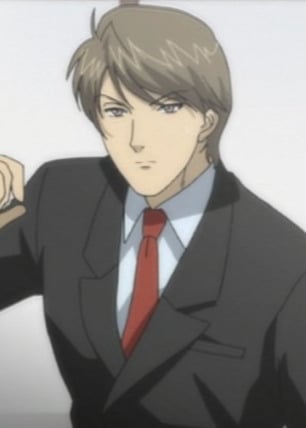 Naoki is a natural genius and tends to rank top in the school when it comes to exams and it is rumoured that he is the smartest boy in Japan with an IQ of 200. Despite his high intelligence, Naoki struggles to find a goal in life because his innate talent means that he never has to work for what he desires. There is very little that Naoki cannot do and, as such, he is not only an extremely good cook, but he also excels in athletics. He has a particularly cold and harsh demeanour, particularly when it comes to those with a lower intelligence than his own.

Really really really boring. No sense of humor, no ambitions, basically no freaking personality. Despite being a total asshat, he's worshipped because he's attractive and gets great grades. The girls kiss his ass and throw themselves at him without giving a crud about who he is as a person. It's so superficial. He's also an abusive assface for 99% percent of the show. He has some moments like reminiscing on how he's never had to work hard and whatnot but he's just boring and unlikable.

My hate for this character has been rekindled. He's so abusive towards Kotoko, it's really hard to watch ngl. It probably would be easier to swallow if he was punished more or if he was an antagonist instead of the main guy and love interest, but truth be told, neither happened. He almost always got the last laugh, and everyone kisses the ground he walks on aside from occasional comments about him being "cold" that his mother makes. He doesn't even really work for what he has and he's so arrogant regardless. I mean, can you imagine how easy life is for him, this guy can read a text ONCE and get a 100% on a test. And not only that, but he also inherited good looks and wealth. None of which, are particularly bad things on their own, he can't help how he was born. The problem arises when he is so greater than thou about those things.