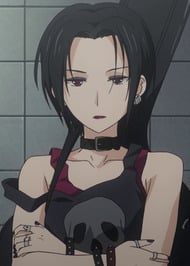 to the people in these comments: she's a parody character, and its clear that she is based off of Nana Osaki. if the mangaka wanted to copy another character they wouldn't have made it this obvious; its clear that 99% of her physical attributes are the same as Nana Osaki. since the similarities are very clear, the mangaka likely had permission from the creator of Nana to make her a parody character.

they practically copied an anime character ;-;

Nana Osaki much? How did they not get sued for this?

wow Nana crosed over the other anime