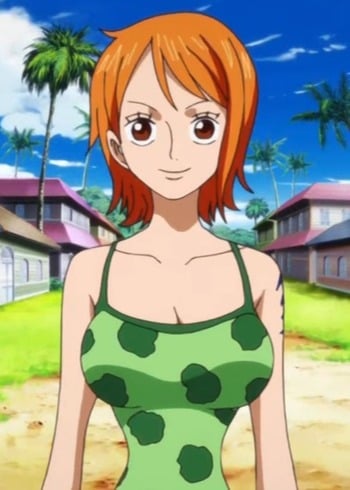 Nami is the Straw Hat’s navigator with a dream to draw maps of the entire world. She has a lust for money, which means that locating treasure is top priority on any adventure and she has no problem extorting her friends if it means that she’ll make an extra buck or two. Though she isn’t a particularly strong fighter, her intellect and exceptional ability to read the weather make Nami a huge asset to Luffy’s crew, even if she does keep a tight rein on the crew’s cash.

God, I fucking hate how this bitch is so obsessed with money, It's just getting so annoying.

She always gets angry so easily and constantly beats the living crap out of the crew members, it just gets on my bloody nerves and its not funny.

I hate abusive characters like her. Nami personality sucks and is nothing but a slut.

Nami has the nerve to tell Luffy what to do went he is the captain. She doesn’t even give a shit about her so-called Nakama.

Her only character traits are obsessing over money, using her body to get what she wants, and beating the crew up as comic relief.

I have no idea why so many people like her so much?

I haven't started watching this show and I loved Nami for her gold digging ways.

The treasure does indeed await.

Good character, i love her interactions with the other crew members, especially Zoro

I love her, she has so much potential but she just doesn't use that ability/talent to the fullest.