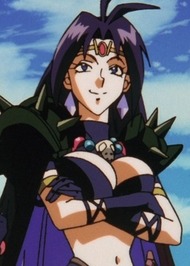 Amelia's "wild" older sister and Lina's first travel companion and part-time rival and antagonist if the money's right.  Naga is insanely attractive; tall, busty, dark-haired, skimpily dressed.  She's also vain, greedy, haughty, and kind of stupid.  She's a skilled magic user and every bit Lina's rival in the use of spells.  Naga's personal vices are often her undoing, and allows her opponents, including often Lina, to gain the upper hand.  As a royal princess herself, she never shows deference to other nobles, viewing herself (accurately) as their equal, even when others fail to recognize her royal parentage, causing frequent consternation.  She is best known for her haughty, dramatic laughter.

Her obnoxious laugh grew on me. I wish she was in the tv series.