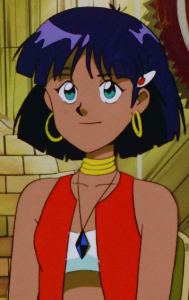 Is she unironically retarded or is it just a well staged trolling ruse?

I wish there was an option for mixed feelings, because that's honestly where I stand with Nadia's character as a whole.  I actually liked her best in the opening eight episodes; she was sympathetic and interesting then.  On the Nautilus episodes she did on occasion get a bit bratty, but she still had her tender moments -- the episodes where she comforts Jean about his father's death and the gyrocopter episode were both very touching.  But on the island/Africa arc?  Oh boy.  Those episodes absolutely pissed me off to no end, namely on account of what the writers did to her character, which is unfortunate and disappointing considering how she was established for the first 22 episodes.  The final five episodes bring Nadia back to her normal self and shows that she is a changed person, but it is hard to forgive her considering the behavior she displays during the filler arc.  If only those episodes were excused, she could have been a more likable character.  As it is, though, it's unfortunate her character gets derailed so badly in the episodes that weren't supposed to exist.

All of this is no fault of the English voice actress, though; Meg Bauman does an outstanding job portraying this character throughout -- amazingly so at the age of 14.

I don't think i've ever come across a more dislikeable character. She's selfish, stubborn, unappreciative, narrowminded and immature. Even the toddler Marie is more mature than Nadia.

Thoroughly unlikeable and shallow -- in my not so humble opinion she was very poorly written. I don't think my reaction is the intended one, I suppose you're supposed to think she's cute? She could have workd well as a side character, but the plot really suffers from such a poorly developed main character. In the real world, being an idiot has consequences, but not in the magical lala-land of Blue Water....

If you pretend certain filler episodes exist, she's really well developed. She can be selfish and makes dumb mistakes (which is realistic of a 14 year old), but more often than not she's caring and protective of her allies. She just feels human and it's great to see her grow up through out the series (the Island & Africa arcs didn't happen).