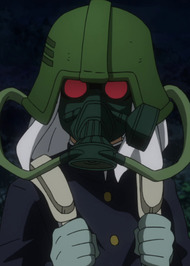 He was so forgetable that I didn't even remember him without watching season 3 again.

Anyways, he was a little bit clever bringing a gun to cover his quirk's weakness.

I doubt he'll ever appear again, but I'd love to see him come back. For a character who only appeared for about six minutes, a number of his lines gave him quite a bit of depth.

He seemed to be jealous of UA students, so my guess is he was denied application to getting in. My guess is he was an outcast in school because of his quirk and using his quirk for villainy was in his mind the only way to be himself so to say.

Since he's a juvenile, I wouldn't think he was sent to Tartarus like the adult villains have been sent to, so I'm hoping there's a juvenile rehabilitation center in the My Hero Academia world. I know the reformed villain is a bit of a cliche, but I would actually like to see Mustard reformed or at least like to think he will be should we never see him again.

Whether he does reform or if he sticks to being a villain, I would still like to see him again in some form or another.