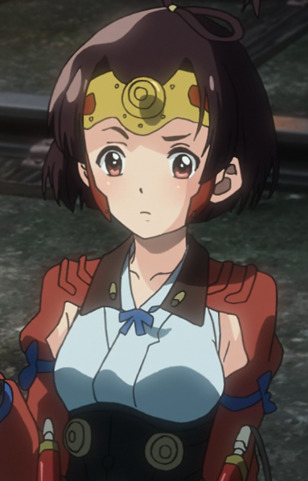 And as an update, my opinion has not changed.

I'm not that far in the series, but I feel like people are judging her based on unfair expectations. Remember that she is a child and she's imperfect, but she's also overpowered and bratty. You can't hold her to the same standards as a mature and reasonable adult, but an underdeveloped child who's gone through the experiences she's had. Perhaps my opinion on her will change after I progress in the series, but as of now, I think she's fine and doesn't warrant hatred.

I can see why people tend to hate Mumei; many of the things that happen in the series happen because of something she did; yet even so none of the things she did were truly done out of evil intent, she was being manipulated and used. It took her a long time to realize and when she did, she had already done something she could not take back; yet even so her as a character and as a person is not evil or vile; she never meant to hurt anyone and the people she did, she did to try and follow her so called "brother's" wish, thinking it was the right thing to do for she had been taught that for years, it was really hard for her to overcome that mindset which had been implanted on her; yet she eventually did and came around to show her better side, proving she was still human.

Also, the whole idea that Takumi died because of her seems silly to me; when she read his wish she was just playing around, like any kid would, and she didn't know that reading the wish of someone else was a bad thing, she was only being playful and I just can't hate her for that, it's just not her fault. Overall, I understand the hate; yet she is one of those characters who I just have to sympathize with, and realize that she was a victim herself; which honestly just makes me like her more as a character, she was perhaps the best written character in the series.

Only reason I don't like her is because she read takumi's wish(and your not allowed to read someone else's wish otherwise it won't come true). BTW takumi's  wish was to make it through all that alive and he ended up dying. I really liked Takumi and Takumi told her not to read it but she bullied him and read it, Takumi was the only kind person to Ikoma so I really liked his character... Maybe I'm being superstitious but I like to believe it's her fault... This behavior you can't blame on her brother, I really hate her.