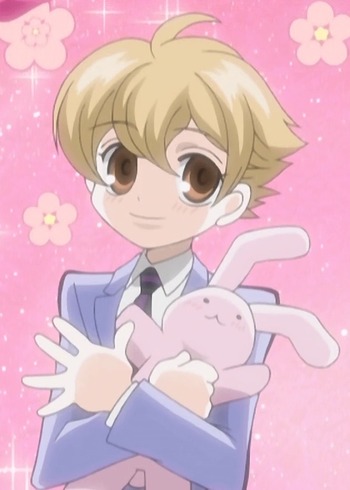 Hunny-senpai as he is called by his friends wants nothing more than eat sweets and play with his friends, which stands at stark odds with his place as successor to the deadly Haninozuka School of martial arts. When he's not stuffing his face with cake, he spends his time hanging around with Mori, Usa-chan (his stuffed rabbit) and the other hosts, or napping.

But he's so damn adorable.

The most cure of the sweethearts.

I really like Honey, he's such a precious cinnamon roll and definitely the cutest character from ouran.

I also like the fact that he's strong as hell and can kick ass when its needed, despite his small ''shota'' stature. + his hilarious relationship/interaction with the rest of the cast makes him one of my fav.

He is so cute!<3 I wish i could eat that much cake without getting sick :( He reminds me of Momiji from Fruits basket. They r both so keewt! >3<