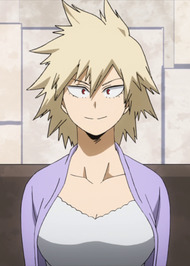 I can only speak for some of us because we all have different reasons for hating her, but...

-struck her son without reason. The fact that she did this so casually, with no provocation, and was comfortable enough to do so in front of two pro-heroes suggests that this is something familiar to her.

(And, no, Aizawa and All Might not stepping in to stop her doesn't prove that it wasn't abuse- remember that these same two adults sat by and watched a child get chained up on live television and All Might went so far as to shove a medal in his mouth.)

-humiliated him in front of two adults he looked up to, even if he would never admit it.

-commended a school that thought chaining and muzzling a fifteen year old boy on live television was an appropriate action to take.

-outright stated that her fifteen year old child being targeted and abducted by an organized group of dangerous murderers was his fault because he was a 'weak little bitch' who 'inconvenienced' everyone who had to rescue him.

We know from Katsuki's mental breakdown in front of Izuku that this is something that he takes very seriously and which still haunts him.

Then there are the implications of his interaction with Todoroki when they watched over those kids and what he said about being 'raised with violence.'

Yes, Katsuki is toxic, but he also has noticed this about himself and is seeking to change (manga readers know what I'm talking about). His mother is toxic as well and is likely the reason behind a lot of his behavior) and unlike her son, we have not seen her actually realize this about herself and work to change her treatment of her son.

No, one manga scene of her fondly flipping through 'Katsuki memories' doesn't change the fact that her canon behavior is abusive.

I wish they could improve this character. She had too many personality flaws (hotheadedness, violent, dominating, etc.)