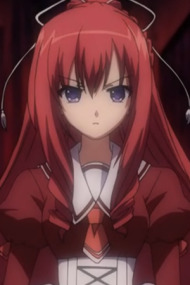 Pretty shit that it was just a possible future where they slept together and it didnt really happen. So wanted them together

LOL she is so sly, when se was lading up to the one thing that could supposedly rapidly increase their powers, my dirty mind said intercourse and when she said it I had a milky nose reaction. It was clearly BS becaue right afterwards they were killed without putting up a fight so no, it didn't make them stronger, it was just something she wanted to do. And BAKA kakeru is so gullable, she knew just how to minipulate him all series.

Though I can't be all mad at her for it, with the world ending right before your eyes, you have a member of the opposite sex next to you with one last chance to tango, thats what I'd want to do as well.

I can't love or hate her. what she did is something I would of done to. but the scenario was still messed up, she knew the dude was hopelessly in love with someone else.

one more thing, Kakeru is real stupid, he should of realized she was lying about the power increase thing when she confessed her love to him, that was the real motive.

Great character. Defenatly deserved to be with kakeru more than Yuka psycho freak. Misuzu is the best!

Oh my god she would be a really cool character if only she wasn't such a slut! Seriously all she tries to do the entire series is get into Kakeru's pants and makes Yuka feel like shit in the process! -.-