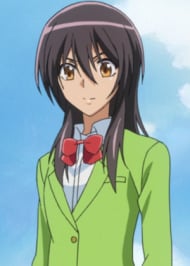 I have mixed feelings about Misaki but I think I dislike her more than I like her because of how stubborn and man-hating she remained throughout the anime (note that I'm only at chapter 42 in the manga so I don't know if her behavior changes later on) despite being met with so many proofs that men are not the same and can indeed be very nice to the opposite sex, and I'm not talking only about Usui. We've seen Yukimura AKA the nicest anime male character ever IMO, Shintani (her childhood friend) and Kanou who's intimidated by girls at first but he has an impressive character development. My point is, I expected her character to develop, especially in terms of how she thinks of men but all I got was her being weak and blushy for Usui (not complaining about this part though because I'm still in love with the guy to this day lol).

she low key got on my nerves-