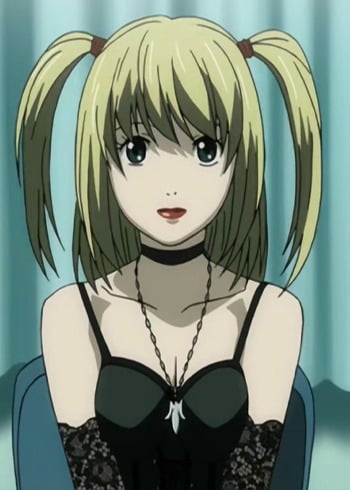 Misa Amane resembles Harley Quinn in her psychology, her unhealthy obsession, her design, and her personality. Harley Quinn is a character I've loved for basically my entire childhood, even sporting pigtails to showcase my love for her. So Misa was basically nostalgic for me, and I feel like she's a completely misunderstood character in Death Note. She's hated mostly due to her hyperactive personality, which translates to annoying, and inferior intelligence compared to the other main characters in the series. First off, her source of depth is her childhood and her witness of her parents' murder, her justice from Light killing the culprit, and her obsession with Light (really Kira) from then on. She was truly the most useful and the strongest character in the series, considering she took the eye deal twice so she could see L's name, so her lifespan was cut in half again. All of this sacrifice was just for Light to love her, but really up to the end, he never gave a shit about her and used her. But Misa still loved him anyway, therefore, she was the strongest and most persistent character in the series. And completely well-written and complex, but I understand how some may not like her personality. I personally do because of, ya know, Harley Quinn haha. There is one thing I dislike about her character, which is the lack of character development. She never learns from her mistakes and never picks up cues that Light is manipulating her, and she becomes so blind sighted due to her obsession with Light, that she didn't even care when Rem died. You know, the shinigami who she developed a relationship with.

But to summarize, I love her resemblance to Harley Quinn, her assistance in the plot, her well-written and unhealthy obsession with Light, her traumatic childhood, and her cute appearance and personality. I dislike how her character doesn't develop.

im quite neutral about her. im not sure if i like her or dislike her but yeah light should be nicer to her.

This girl is a bit empty-headed. She's too clingy aswell. And annoying. Not my favourite character but Light should definitely treat her better.

it's not about misogyny or anything, she's just plain annoying