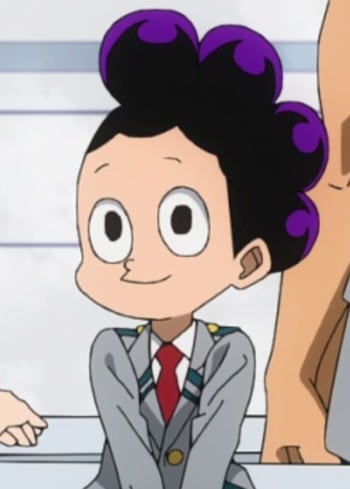 So when theres a pervert in another anime people love him especially if hes good looking but minetas hated? alright stop being hypocrites lol

I know perverted characters are a common anime trope but the way Mineta is written is annoying as hell. Yet as soon as I learned more about his power I questioned my dislike tbh lol. Either way it's not clever even if he's a trope or not.

I fucking love Mineta in my own opinion. He's the well needed comic relief in this show that's serious 80% of the time.

Mineta is my boy. I know he is a perverted coward, but he brings a lot of comedy to the table, at least to me.

From what I hav watched he is just perverted and a coward.  He does show courage sometimes but for all the wrong reasons.  There is nothing more nothing less.

A better pervert character is Denki, he also is pretty perverted and sometimes joins Mineta but why no hate on Denki?  Because Denki isn't JUST a pervert, their is much more depth in him that Mineta.  Mineta is JUST a pervert.  Denki has more character than that.

People comparing Mineta to people who ships.  I disagree because shipping is not the same as actually going to the hot tub and watching.

For example i ship Kiribaku, ofc i would want to see them without shirts etc. but if i was actually in their world i would never invade privacy of them like Mineta does to the girls.

A comment (who's points defending Mineta a really good) says that he is "following urges".  That is not an excuse.  He has groped girls and I find that disgusting.  It can't be justified because he is following urges.

I won't say that he ruins the show because although i don't like him, he is pretty funny.  But again that doesn't excuse him at all.

I get people say it is a world of fiction so it is okay but say for example there is this really twisted manga of two characters Sangwoo and Bum, who has the most toxic relationship ever (Sangwoo is a rapist-) and people still somehow ship them??? That is NOT okay.  The example I am using makes Mineta pervertedness innocent actually and I am definately not saying Mineta is as bad as Sangwoo but what I am saying is that it being merely a fiction isn't a good argument because supporting acts that are fiction is basically supporting it in real life.

Though it may be fiction to us, for Minets, it is real life.  So would you like a creepy grape dude trying to always peek at you when you are changing?  Imagine how distress the characters feel because of him.  His actions are honestly disgustingand extremely invasive.

Again, let me say, you are allowed to like Mineta.  It is okay.  Don't feel ashamed at all.  i am merely saying why I don't like him.  If you want to defend him then please do on my bio so i get notifications and also on the bakugou page there was an argument which led to some of teh comments being deleted so PLZ LETS DEBATE ON MY BIO.

If anyone attacks you for your opinon, you have the right to defend it :)

The purpose of this comment wasn't to offend anyone so please reply if you feel offended. because you have my deepest apoligies