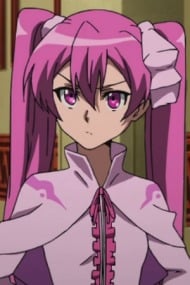 Mine is wonderful. She wanted nothing more than to avenge Sheele. Sad to see her die, still one of the saddest moments in any anime ive seen but im glad she went out avenging Sheele and in Tatsumi's arms.

I like her mainly because I have some sentiment for her character and this anime at all. I don't think this is good character/series but I enjoyed it. I saw she's getting more hate now (especially from Esdeath fans) and i wanted to write my opinion.

I don't think Mine is very good character.First of all: She's kinda hypocrite. She complains about being treated as outsider as a child but then she treats Tatsumi that way when he joins night raid. Its dumb. Also her character doesn't have much depth (still more than most of characters in this series). She's acting like tsundere most of the time but for some reason I find her enjoyable. She's not annoying and sometimes funny. She's likeable that's all. I heard that she's better in manga.

I don't like her relationship with Tatsumi. I felt like it's forced. But all this harem thing is forced. I think she's the best choice for him cause they ... most fit together i don't know and his relationship with other girls (especially esdeath) makes no sense.

I didn't expect to write as long comment lol. Sorry if it's kinda messy. I think I rewrite it later if i don't forget.

I found her annoying at first but after she and Tatsumi became a couple in the manga made me like her. I hated the anime for killing  Mine and Tatsumi. The manga was way better for gving them a better ending.