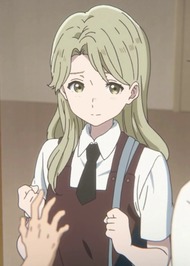 i will never understand why she is ranked lower than ueno on the most hated list she should be ranked higher if you only watched the movie you probably won't notice it at first but if you rewatch it you'll realize how much worse she is than ueno. especially when you read the manga dear god she sucks ass. a narcissistic, hypocritical fake bitch with 0% character development and instead enjoys playing the victim and antagonizing others 24/7 i hate ueno too but at least she took accountability of her actions and admitted they were terrible whereas kawai on the other hand did not she just stayed a bitch throughout the entire manga and movie

She looks even worse in the manga.Legit crying like a baby,at least Ueno was sort of redeemed in volume 6.Miki legit peached clownery in volume 5.

I hate her so much