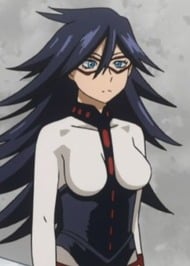 Not attracted to pedophiles sorry

Am I supposed to find her hot just because she has tits and wears a tightly fitting outfit? You need more to show for it if you want to create a hot characdter.

"Judging people because of their clothing won't get you anywhere."

You know I don't even like Mineta but this is the epitome of why I agree 100% with Mineta fanboys when they say some of you haters for Mineta only hate the appearance of Mineta, not what he's doing, aka that if Mineta was looking like Todoroki ya'll would not say a single thing about Mineta as a character. Midnight may not have literally go out and try to rape someone, but there have been several times where she has made inappropriate remarks and innuendos and blatantly fantasized about some of the freshman. One of the latest openings even sheds light on Midnight being a whole creep, if I recall correctly.

It's crazy how some of you people have so much heat for Mineta but defend characters who are even more disgusting creeps.

I can see people comparing her to mineta but this woman hasn't made any kind of sexual moves agaist anybody so far.

And mineta is constantly thinking and sometimes trying to do perverted acts.

Judging people becauase of their clothing won't get you anywhere.