Aka: Dragon's Sin of Wrath 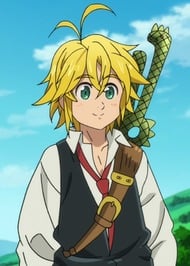 Captain of the Seven Deadly Sins, Meliodas is also known as "The Dragon's Sin of Wrath".  He owns and runs the "Boar's Hat" bar (which he raised funds to build by pawning his sacred treasure, the demon sword Lostvayne) although his cooking is absolutely dreadful. Despite his short stature, Meliodas is extremely strong and has been alive for far longer than he looks. His power increases exponentially when he's angered, and he's reluctant to use his full abilities for fear of gravely injuring someone. He is very protective of Elizabeth, but that doesn't stop him from groping her and peeking under her skirt.

So? That doesn't give him an excuse to violate Elizabeth every second he gets LMAO

Nah the groping every moment he gets just ruins the character.

Oml I fuckin hate him

Not sure why people hate on him. Maybe it's just my perception but I get the feeling that there are worse protagonists out there in anime that are getting far less hate.

Plus I get the feeling that people don't even try to understand him.

Notice that he has been emotionally suffering for 3000 or so years because of the curse.

I think whatever people dislike about him (bc I have no idea what. People say they dislike him, but most don't say exactly what), is most likely due to just reasonable writing/"comedy" relief. When he touches elizabeth, keep in mind that he has been in a relationship with her for, well, an extremely long time, and many times too. It's up to you if you derive from this the point I'm trying to make.

His personality/general mannerisms could also suggest many things. For one, it's difficult to read him because of it. He's like the embodiment of a pokerface. I think that's rather unique and it strays from the usual personality formats.

Yeah I'm just taking blind shots here. He's perverted, but there are far more perverted protagonists out there. Hell, KEYARGA of all anime protags is getting less hate!!!

Which leads me to the conclusion that people here are just far too serious about Meliodas for some strange reason. I too hate it that the quality of the story and animation kinda just went plop eventually but you shouldn't be hating an anime character for it, but the studio (duh).

I also dropped the show because of him. I liked the other characters but I really couldn't stand him. Pity, the plot was great. I could just say he wasn't my cup of tea but he was also a pervert so.. no.