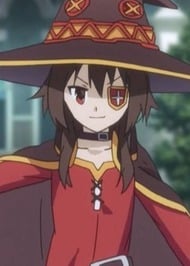 I was the same age as her when the anime released, I've also loved explosions my whole life, I like big hats-

I kin her so hard

Let me tell you why Megumin is so popular, as a Megumin fan myself, most of the Megumin fans are Light Novel Readers so therefore they have gradually developed a special spot for Megumin. To the anime-only watchers, she's a chuunibyou loli who loves explosion, she is the most active in the group always wanting to do quests in order to release her Explosion, her interactions with the group are funny, for example her naming sense (Chunchunmaru and Chomusuke) and she's also quite open about her feelings to others. Many anime watchers even suggest that every Konosuba moment with Megumin in it was their favourite moment and I won't argue, out of all the group members she has proven herself to be useful, arguably the second most useful member in the group after Kazuma, she defeats most of the Demon Generals and strong enemies in the anime adaptation as well as in the Light Novel series, in the anime, within the group she has defeated Sylvia by herself (YunYun's involvement was anime only), Vanir, gave a major blow that helped defeat Hans, defeated the Destroyer along with Wiz and also ended it herself. Her power is the one who ends all the group's enemies. She always gives the final blow.To the Light Novel Readers, she has the most character development in the series and most of them will agree, she grows much more caring and acts much more mature, and she even shows restraint in releasing her Explosion, and only does it when Kazuma tells her to do so and her coordination with Kazuma is always on point because of how close they've gotten with eachother, they realise what the other is thinking and act accordingly, for example in the Manticore and Griffin subjugation. She wishes for the group's happiness although she has romantic rivals within the same group.Some people also like her for the relationship she grows with Kazuma, she's shy, doesn't have a clue about how a relationship works and always ends up in awkward moments with Kazuma. She tries her best to become Kazuma's ideal girl - In one Volume Kazuma says that he prefers big t*ts and long hair, so then she feels the need to grow her short hair and she does. In Volume 9 she explains why she loves Kazuma so much, the way she had explained him was so on point that, most people realized then that there will be no other girl that would understand Kazuma any better than her, she doesn't love Kazuma for only the good points in him, she can love him despite knowing all the flaws in him, and among all the girls that Kazuma has met in his life, Megumin is the only girl who truly loves and understands all of Kazuma, this is the reason I love this ship so much and this relationship is set the moment Kazuma also confesses to Megumin in Volume 11, and keep in mind this is the first ever girl that Kazuma has admitted to love, Kazuma has even picked up some of her traits in the series after how close he had gotten to her, he has grown much more open about his feelings and also shows his caring side to his team members even to Aqua after she ran away from home and he has also grown mature rejecting Darkness and agreeing to stay loyal to only one girl, Megumin. The reason for Kazuma's mental development is Megumin.

She really is not overrated at all, she deserves credit for all she has done.

she got gigguk approval and so she gots mine. Best girl material idk about waifu but the cuteness can kill 0v0